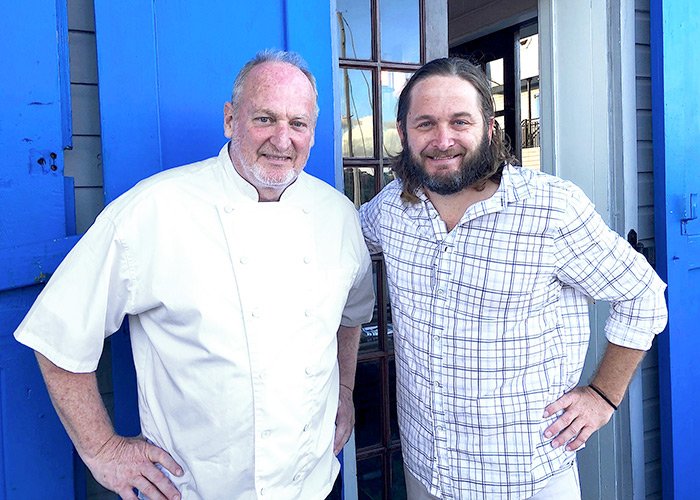 Dining in St. Thomas | Food and Drink | Our Island | What to do in STT

Owned and operated by Barth Melius, the savvy New Orleans native comes to the table with lifelong restaurant experience. “I was raised in the business,” he said. His family operates a number of well-known establishments on Bourbon Street and beyond.

After a brief visit to St. Thomas in 2016, Melius said, “I immediately fell in love with the island.” In short order, he made the Virgin Islands his home.

Melius first displayed his expertise and entrepreneurial skills to islanders when he opened Bernie’s Bar & Grill on the lower level of American Yacht Harbor in early 2017. The popular bar is operated by Neill Lenaghan and features cold drinks, beer on tap, and tasty food.

Above: The all new 3 Palms fine dining restaurant overlooks the marina at American Yacht Harbor.

Melius’ latest venture is nearby at 3 Palms Bistro-Bar-Balcony. The restaurant focuses on fine dining in a uniquely welcoming marina setting overlooking the harbor.

Offering a distinct French-Creole flair, the menu changes nightly, based on the availability of prime meats as well as the freshest seafood and produce from local farmers and fishermen. To ensure the quality of preparation on every plate, Melius brought onboard a celebrated chef who happens to be a member of his extended family.

With a nod to breathtaking panoramic views from the restaurant’s balcony, craft cocktails at 3 Palms are total scene-stealers. Selections include Blueberry Sky made with Tito’s vodka, blueberry puree, and lemongrass, Cabana Banana made with banana infused rum, Maker’s Mark and Banana Combier, as well as the signature 3 Palms Daiquiri prepared with Cruzan dark rum, Yuzu liqueur, pineapple and Falernum syrup, just to name a few.

3 Palms also features an extensive wine list and is open for dinner seven nights a week.