»  » At Sea La Vie, the Accent is on Intimate Dining

At Sea La Vie, the Accent is on Intimate Dining 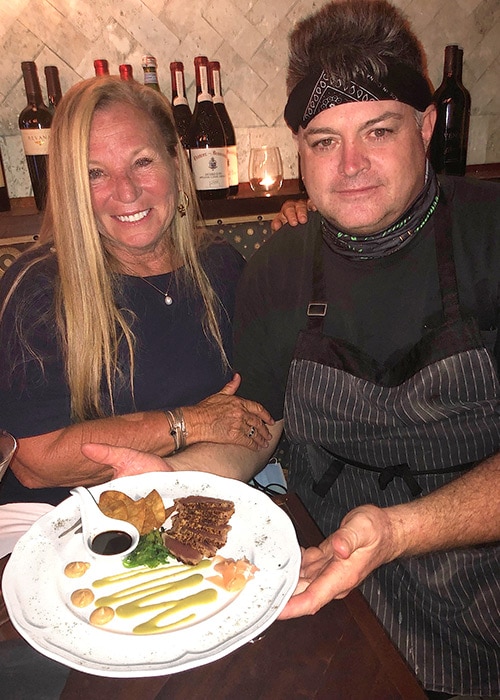 Above: Welcome to Sea La Vie where seating is available on the outdoor patio, air-conditioned bistro, or cocktail bar.

Situated near the water’s edge in Frenchtown, Sea La Vie is a charming French bistro with an appealing accent on intimate dining.

The unique name is a dual-language play on words — a bow to the nearby sea — melded with the classic French phrase that translates to “Such is life.”

Owned and operated by Courtney South and Cody Jones, the enterprising duo share a passion for creating unique culinary experiences.

Truth be told, Sea La Vie is frequently pre-booked with ‘regulars’ — so reservations are strongly recommended.

You may want to begin your meal with garlic baguette and Gorgonzola fondue, parmesan-crusted diver scallops, roasted beet salad, steamed Newfoundland mussels, or other scrumptious options.

Beyond menu offerings, an attractive wine list, and tempting nightly specials, the restaurant speaks volumes with regard to priceless details, from soft lighting to the sultry sounds of jazz — à la Billie Holiday, Sinatra, and other audio delicacies — playing in the background. The result? Even before you enter, it seems a welcoming spirit is reaching out and greet you at the door.

Courtney hails from Portland, Oregon, and has been part of the St. Thomas hospitality and dining scene for nearly two decades. Shortly after meeting Cody, also a seasoned service professional, the two began sharing a lifelong dream to become restaurateurs.

After hurricanes Irma and Maria barreled through the islands in September of 2017, the storms left behind an opportunity for the couple to make their dream a reality.

Said Courtney, “We did just about everything ourselves. We cut tile. We built these tables.” With a warm smile, she added, “I became an upholsterer, too.”

Thinking back, she credited her grandfather, an architect, for inspiring her to approach each project with a classic ‘can do’ attitude. Looking around at the results, Courtney said, “This was a labor of love.”

Doors opened on December 21, 2018. “It was the night of the holiday boat parade,” Courtney recalled. “We were swamped.” Such is life, indeed. How appropriate!

Affectionately known as “Starkey,” he wears two hats as a seasoned fisherman. It is not at all unusual for Starkey’s fresh catch to take center stage with other nightly specials he prepares in the kitchen.

Chef Paul advised that local lobster is frequently on the menu. He added, “We also feature a lot of fresh, locally sourced greens, in season.” Formerly the Executive Chef at Simply Italian on the grounds of Flamboyan Resort, Chef Paul also freelances as a private chef.

Sea La Vie is located on Rue de St Barthelemy at the former site of Epernay. Doors open at 5:30 p.m. Tuesday through Saturday.