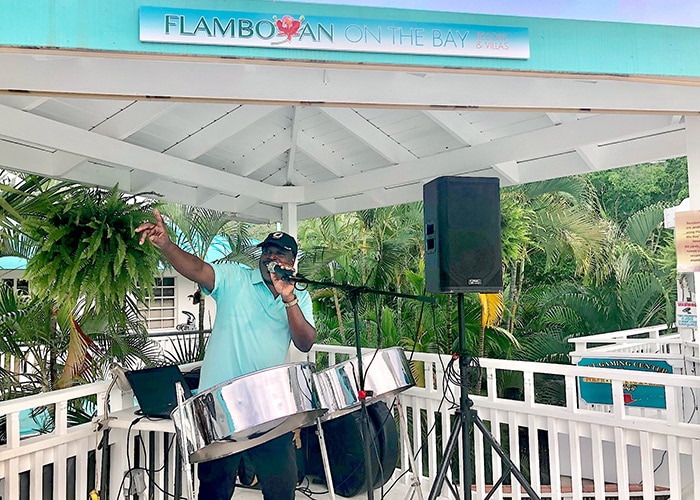 Andrew Douglas | Art | Coco Bits | Music | What to do in STT

A BIT ABOUT GINGER THOMAS

Formally known as Tecoma Stans, Ginger Thomas is the official flower of the Virgin Islands. Distinguished by bright yellow blossoms and trumpet-like shape, it is also known as Yellow Trumpet Bush. Native to Florida, Texas, and other areas of the American Southwest, Ginger Thomas adapted easily to the islands and has become part of the traditional West Indian bush medicines.

It’s been a slow and steady process but signs of life, pre-pandemic, are returning to the islands.

One of the most exciting social revitalizations at Flamboyan Resort is the return of steel pan musician and vocalist Andrew Douglas to the upper pool stage.

A native of Trinidad, Andrew learned steel pan as a youngster and performed in his uncle’s band before relocating to the Virgin Islands several decades ago.

In the 1980s, he was part of the popular St. Thomas duo “Wildflower and Savage.” During that time, his talents took him from Caneel Bay, St. John all the way to Ocean City, Maryland.

In 2003, Andrew loaned his musical talents to the publication of a combination Caribbean novel and CD titled, “Back To The Ship.”

Today, in addition to taking the spotlight each Friday at sunset at Flamboyan Resort, he is available to perform at private functions.

Top of page: Each Friday at sunset, Andrew Douglas plays steel pan and sings to a delighted audience at Flamboyan On The Bay Resort & Villas.