SIGNS OF THE TIMES

WHAT’S IN AN ISLAND NAME?

GIVING BACK TO THE COMMUNITY

THE TRUTH ABOUT SEA GRAPE TREES

Welcome to the Premiere Edition of

In the spirit of spreading good news “island style” — with a bow to modern technology — welcome to the very first online issue of Coconut Post.

A peek into our tropical history books reveals that once upon a time local news, gossip, and notices were simply posted on a designated coconut palm tree for all to see.

Boaters picked up on the term, making it their own by referring to a shared radio frequency as ‘coconut telegraph.’  Communications companies also got into the act, referring to signals originating from tropical areas as ‘coconut wireless.’

We decided to go back to the ‘root’ of it all —saving trees in the process —Coconut Post! 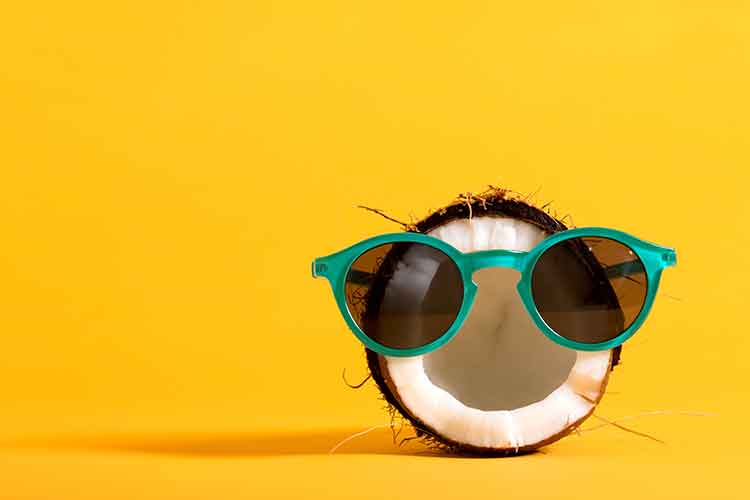 In addition to Coconut Post spotlighting slices of life in paradise, look for “Coco-bits”  — tidbits of tasty info, island history, and fun-to-know facts scattered throughout the publication. Keep in mind here in the islands ‘views’ are visual — not so much editorial, LOL

SIGNS OF THE TIMES

In harmony with ongoing eco-friendly efforts, Flamboyan On The Bay Resort & Villas recently commissioned “Don’t Litter” signs — made of recycled wood — to place throughout the property.

The colorful reminders were created by local artist Allison Carey and installed by her partner, Jay Jacobus.

Known as “Save The Day Jay” Jacobus is a skilled mechanic and all around MacGyver-ist. He earned his nickname for the countless times he’s come to the rescue of islanders with vehicle issues and other challenging projects.

Allison’s mixed media artwork ranges “from abstract to realist” as she phrases it. Frequently celebrating island hues, her intriguing portfolio is available to view by appointment.

To contact Allison Carey or Jay Jacobus — or for information on ordering custom painted and wood-burned signs for your home or business, email: [email protected]. 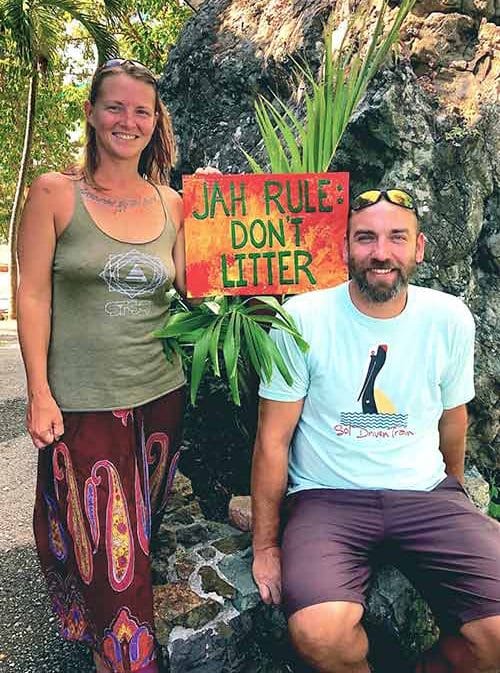 The exquisitely beautiful flamboyant tree — celebrated for its vibrant orange-red summertime blossoms — is known by many names including Royal Poinciana, Delonix Regia, and “flame tree.”

Although native to Madagascar, the tree thrives on tropical islands — even during droughts — and is known to tolerate salty conditions. Wide roots provide flamboyant trees with a system to remain grounded when trade winds are high or hurricanes make landfall.

The long brown pods of the flamboyant — which can grow to a foot and a half in length — become particularly conspicuous when the hardy tree sheds its leaves. In the Caribbean islands, seed pods are often used as percussion instruments known as ‘shack-shacks.’ 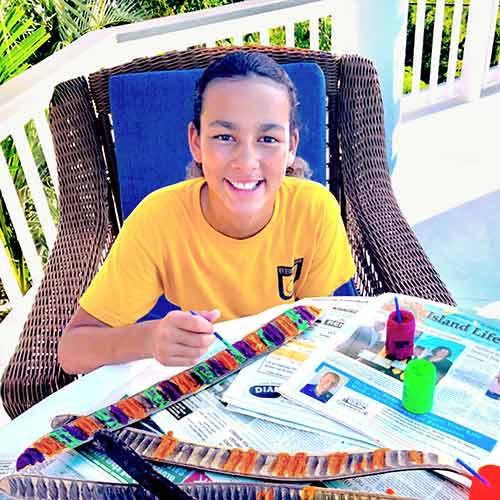 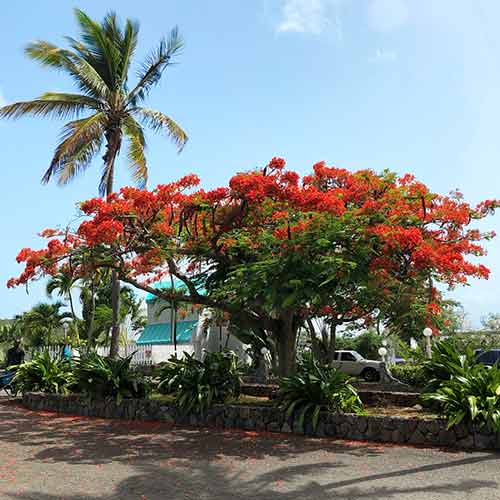 This vibrant flamboyant tree — one of several hundred dotting St. Thomas hillsides — greets guests at the entrance to Flamboyan on the Bay Resort & Villas.

A natural canvas, school children also make use of dried shack-shacks to paint colorful designs, then display on walls.

In 2002, award winning steel pan entertainer Andrew Douglas recorded the song “Shake Your Shack-Sheck” for a musical CD packaged with the novel “Back To The Ship” by local author Teddi Davis. The book / CD is available for sale at Flamboyan on the Bay reception desk.

A bit about the coal pot

Dating back before the invention of the kitchen stove, coal pots are still a mainstay when it comes to cooking old school in the tropics. Made from red clay, ceramic, iron or aluminum, the pots are used to prepare a one-dish meal. Savvy island cooks have a special knack for using the coal pot to steam, broil, fry, stew or bake.

“We are proud to have had three generations on the island for so many years. It will always be ‘Home’ in our hearts.” 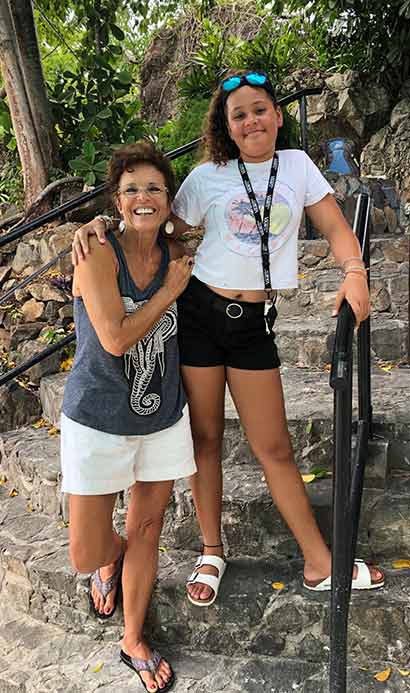 Local author Donna Pagano poses with 12-year-old granddaughter, Amalia Grace, on the grounds of Flamboyan on the Bay.

What’s in an Island Name?

Located on the island of St. Thomas, Charlotte Amalie (ah-MAH-lee-ah) is capital and largest city in the U.S. Virgin Islands.

Originally known as “Taphus” meaning “beer hall,” in 1691 the harbor town was given a considerably more elegant name, Charlotte Amalie, in honor of Charlotte Amalie of Hesse-Kassel (1650–1714), queen consort to King Christian V of Denmark.

Occasionally, island parents make the decision to name a child after the celebrated tropical city. When their daughter was born at Schneider Hospital on Sept. 21, 2007, Kizza Matthews and Hilary Joan Marquardt chose to name her Amalia Grace.

Although she moved to Sarasota, Florida with her parents several years ago, Amalia returns to St. Thomas to visit her grandmother, Donna Pagano, with regularity.

A well known Virgin Islands publisher and author, Pagano has been an island resident since 1986. She founded The Island Trader and was at the helm of the popular weekly publication for 15 years. She also penned the novel “Merging Lives.”

Said Pagano, “We are proud to have had three generations on the island for so many years. It will always be ‘Home’ in our hearts.”

At Root 42 Bar and Grill, Bud Light fans are all about winning. Order a Bud Light during any NFL game, “root” for your favorite team, and you get a chance to “scratch and win.” You could rack up great prizes including a free beer, bar towel, T-shirt or other fun prizes.

All during the game, Bud Light is just $3 — or order a five-bottle bucket for $13. Every beer you buy comes with a free scratch off ticket.

During all NFL games, Root 42 Bar and Grill features Bud Light on special — and chances to win great prizes, too. 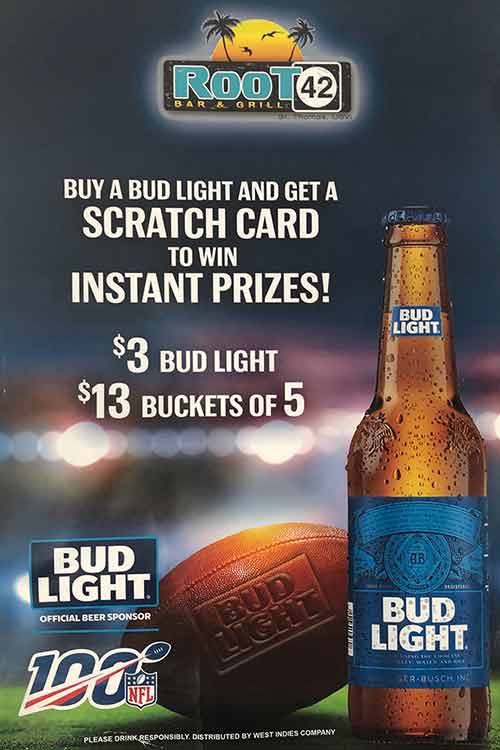 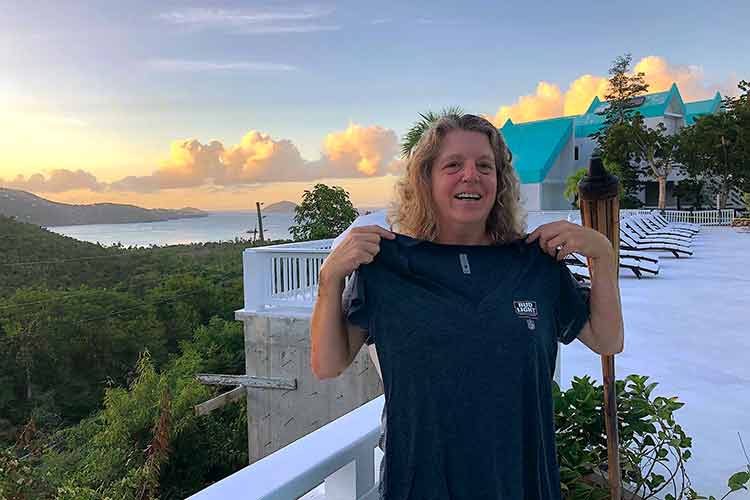 During her first visit to St. Thomas, Florida resident Kim McEachern was thrilled to see her favorite beer in the spotlight at Root 42. She won several free beers, a bar towel, and a T-shirt. What luck! Her team won, too.

Root 42 Bar and Restaurant is located on the grounds of Flamboyan on the Bay Resort & Villas.

For information on upcoming events and special promotions, go to facebook.com/root42vi or call 340-513-1688.

For added convenience, indoor and outdoor seating is available. 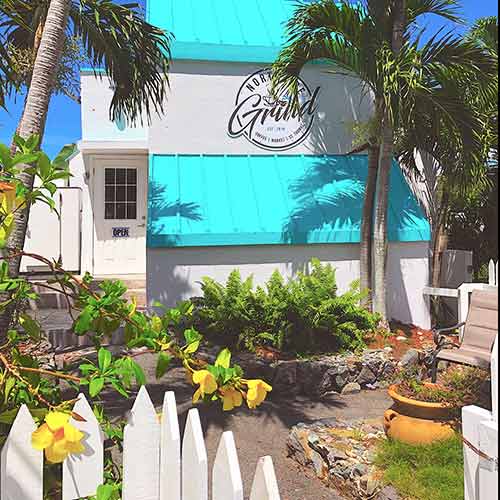 Welcome to Northside Grind at Flamboyan on the Bay. From fresh coffee, bagels and baked goods to grocery items, snacks and beverages, Northside Grind is your one-stop shop. 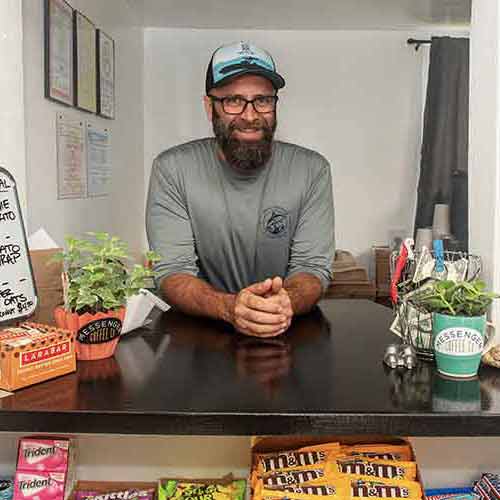 Service with a smile.

The spirit of great friends working together at a very special place comes to life at Northside Grind. The quaint Caribbean coffee house is a deli, wine shop and mini mart, too.

Aromatic Messenger brand coffee is in the spotlight at the “self-serve” station. You also can purchase specially-blended bags of Northside Grind signature roast. The gourmet coffee is great for creative gift giving.

Northside Grind offers appealing displays of baked goods and fresh fruit as well as grab n’ go favorites. The well-stocked mini-market carries juice, soft drinks, beer, wine, liquor, groceries and snacks. While you’re there, be sure to check out the daily blackboard specials.

There’s plenty of parking on the grounds at Flamboyan on the Bay Resort & Villas.  With the island’s ongoing power issues, it’s worth mentioning the property runs off the grid on a dual generator system, so no worries about outages.

A bit about our Danish History

When its game day Brian Cox and his and mom, Patty Zelaney, are always in Redskins “cheer gear.”

A front desk agent at Flamboyan on the Bay since 2015, Patty Zeleney proudly shared she’s been a diehard Washington Redskins fan for 65 years.

“We’re fifth generation Washingtonians on my father’s side,” she said, adding, “Rooting for our team is in my blood. I’ve been a fan since age three.”

Wherever life has taken her, Patty’s enthusiasm remains constant. “When I lived in Germany for five years, we watched the Redskins on Stars and Stripes TV,” she said.

The mother of two, Patty successfully influenced her son, Brian Cox, to embrace the team spirit tradition. She recalled Brian’s first sentence at age two: “Go Joe, go.” With a nostalgic smile she explained, “He was watching Joe Theismann in action on TV.”

When Brian was in high school, the family moved to Tarboro, North Carolina. “We had Redskins season tickets and lived four hours and 22 minutes from the stadium,” said Patty.

She recalls that precise timing for good reason. During football season she’d lock the doors to her sign shop on Saturday afternoons, wish her staff of 12 a great weekend,. Then she and Brian would pack up the Ford Explorer and head up Route 85 toward FedEx Field. The two hardcore fans would stay at a hotel near the stadium, tailgate the next day, cheer on their team at the game, then drive home to Tarboro. “We did that for 18 weekends for six or seven seasons,” said Patty. “We never played the radio on those trips. We talked all the way. It was our mother and son time.”

In addition to supporting her team, Patty became an avid collector. For decades she accumulated a treasure trove of Redskins memorabilia. As a result, when mother and son relocated to the islands in 2014, Patty’s nephew became the beneficiary of a U-Haul trailer’s worth of everything from Redskins lamps, neon lights, and rocking chairs to a football-shaped crockpot powered by an auto cigarette lighter — ideal for tailgating.

Here in the islands, Brian owns and operates Root 42 Bar and Grill and recently partnered with Brandon Lutzy to open Whiskey Business Bar and Grill in Tillett Gardens.

Despite being far from the mainland, Patty and Brian still watch the Redskins together on TV — always dressed appropriately in Redskins attire. 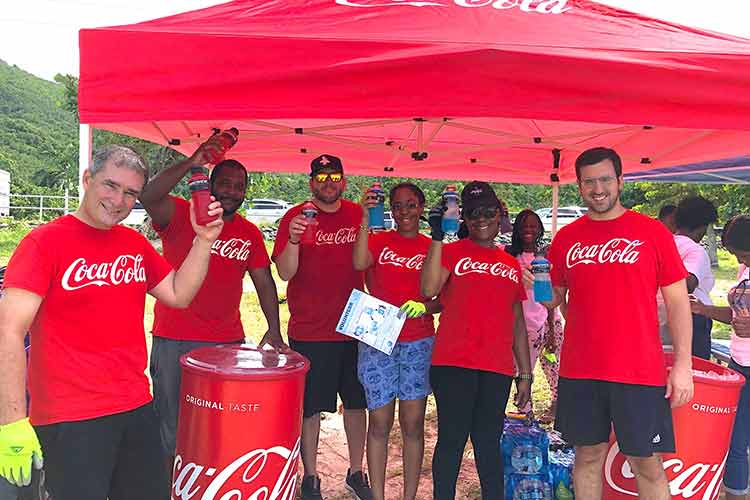 Community spirit runs deep in the Virgin Islands. Many local businesses support non-profit organizations and events — not only with monetary and in-kind product donations but hands on help, as well.

Our friends at Coca Cola are well aware that part of honoring the natural beauty of the tropics involves keeping our coastlines clean and safe for tourists and residents to enjoy. With that in mind, the staff and management of Coca Cola USVI participates in organized coastal cleanup events.

A bit about the Iguana

Although iguanas have an off-putting pre-historic appearance — complete with spiny projections — these critters average about three-feet in length and are largely passive. However, iguanas tend to enjoy snacking on hibiscus and are consequently drawn to bright red colors in general. With that in mind, watch your toes if you happen to be sporting vibrant red nail polish.

At a cleanup event on Brewers Beach, General Manager Hugo Torres took a moment to comment, “Everyone at Coca Cola sincerely wants to help. We’ve got to keep our islands clean.” True to his word, in addition to providing ice cold refreshments, Torres and his team made multiple trips to the coastline and back for several hours, removing debris along the way.

Whether you are on St. Thomas for a day, a week, or a lifetime, please do your part to beautify our islands — and support the businesses that reflect the best of our community spirit.

The Truth about Sea Grape Trees 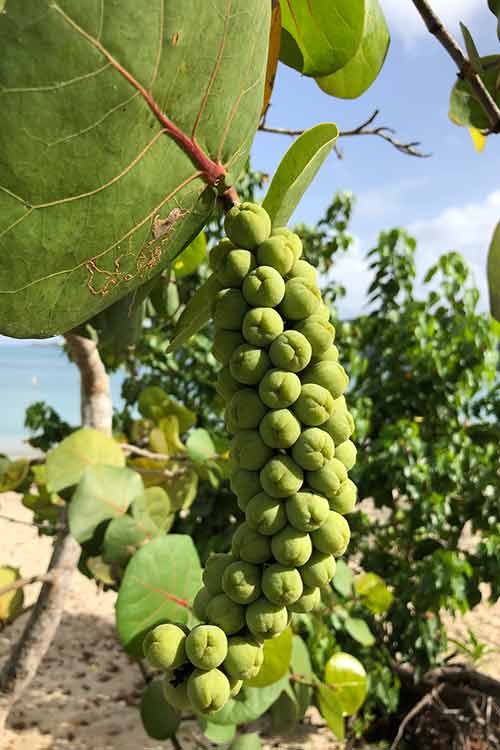 Unlike the coconut tree, sea grape trees are native to the Caribbean. The visual delights are extremely hardy, wind resistant and tolerant of salt water and salt air. Sea grape trees flourish in extreme coastal environments including harsh sunlight and high winds. No wonder the lush greenery is found thriving all through the Virgin Islands. Another “plus” is that sea grape roots actually help to reduce sand erosion.

And don’t believe the rumor about the Caribbean fruit being poisonous. It’s just not true. However, sea grapes are not ripe for eating until turning burgundy in color.

Any cookies that may not be particularly necessary for the website to function and is used specifically to collect user personal data via analytics, ads, other embedded contents are termed as non-necessary cookies. It is mandatory to procure user consent prior to running these cookies on your website.