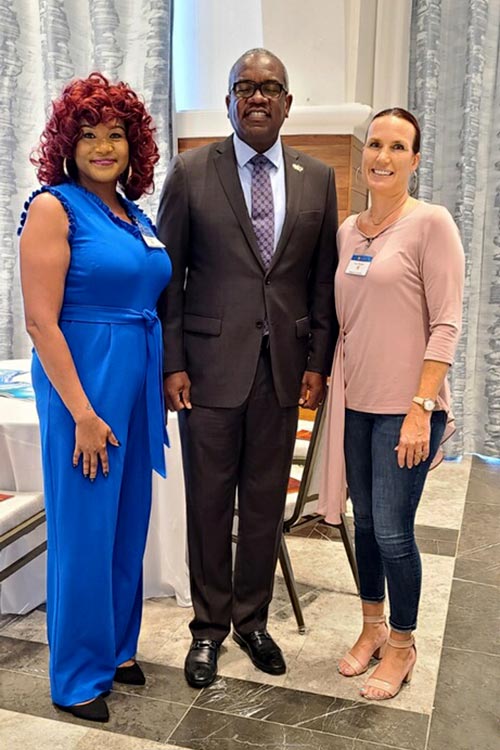 Flamboyan On The Bay Resort & Villas is proud to be a member of the U.S. Virgin Islands Hotel & Tourism Association.

The Association was officially incorporated in 1981; however, it has unofficially existed since 1950.  Alton Adams Sr. (1889 – 1987) served as the association’s very first president.

Adams is remembered primarily as the first black bandmaster in the United States Navy, as well as the composer of “Virgin Islands March.” Addressing the need to increase the number of available hotel rooms on St. Thomas, in 1947 he opened up his home as the Adams 1799 Guest House.

In 1952, he became a charter member of the Virgin Islands Hotel Association and was elected president, a position he held until 1971.

Above: Alton Adams, Sr. (1889 – 1987) served as first president of what today is officially known as the U.S. Virgin Islands Hotel & Tourism Association.

Top of the page: At the annual U.S. Virgin Islands Hotel & Tourism Association meeting, Governor Albert Bryan, Jr., took a moment to pose with Carla Gifft and Tracy Wayman of Flamboyan On The Bay Resort & Villas.

During that time,  in addition to being a hotelier, Adams worked as a stringer for the Associated Press and reporter for the Associated Negro Press. He also contributed articles to the Pittsburgh Courier and other publications. Although he never ran for public office, Adams was closely involved in island politics as an advisor and editorial commentator.

Today, USVIHTA is a vibrant, forward-thinking, not-for-profit corporation that “… serves as the unifying organization for hotels, guest houses, inns, condominiums, campgrounds and other tourism-related business in the St. Thomas-St. John district of the United States Virgin Islands.”

On May 4, 2022, the USVIHTA held its annual general meeting at The Ritz-Carlton, St. Thomas. Highlights of the meeting included welcoming words from Chairperson Terri Brown, and President Lisa Hamilton. A vote on the 2022 Board of Directors slate included installing Scott Derrickson of Marriott Frenchman’s Cove as new chairman.

At the meeting, Flamboyan Resort was represented by Tracy Wayman, Carla Gifft and Teddi Davis. More than 100 attendees were on hand to welcome special guest, Governor Albert Bryan, Jr., who gave an inspiring speech on the future of tourism in the territory.

All year long, USVIHTA offers vital support to members — as well as the community at large — through a number of active committees. Everything from culinary training and education to ‘going green’ initiatives and entrepreneurial guidance from business experts is on the agenda.

A BIT ABOUT TRADE WINDS

For centuries, trade winds have been used by captains of sailing ships to cross the world’s oceans. The Caribbean is one of the few places on the globe where wind direction can be predicted with relative certainty. Due to the rotation of the earth — and the Coriolis Effect which makes planes appear to move at a curve as opposed to a straight line — the islands are blessed with Easterly trade winds. By the way, the term “trade winds” was coined centuries ago when those ever-predictable winds guided trade ships from Europe to the islands.