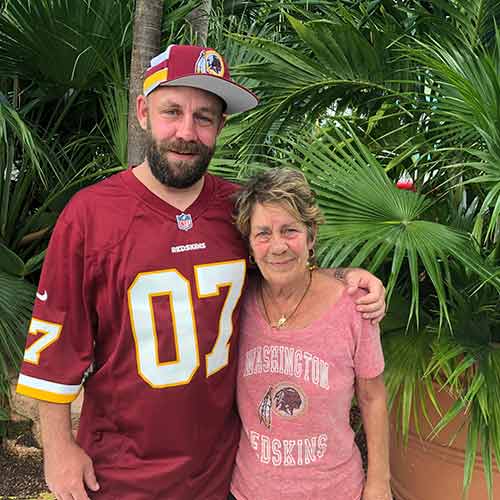 A front desk agent at Flamboyan on the Bay since 2015, Patty Zeleney proudly shared she’s been a diehard Washington Redskins fan for 65 years.

“We’re fifth-generation Washingtonians on my father’s side,” she said, adding, “Rooting for our team is in my blood. I’ve been a fan since age three.”

Wherever life has taken her, Patty’s enthusiasm remains constant. “When I lived in Germany for five years, we watched the Redskins on Stars and Stripes TV,” she said.

The mother of two, Patty successfully influenced her son, Brian Cox, to embrace the team spirit tradition. She recalled Brian’s first sentence at age two: “Go Joe, go.” With a nostalgic smile she explained, “He was watching Joe Theismann in action on TV.”

When Brian was in high school, the family moved to Tarboro, North Carolina. “We had Redskins season tickets and lived four hours and 22 minutes from the stadium,” said Patty.

She recalls that precise timing for good reason. During football season she’d lock the doors to her sign shop on Saturday afternoons, wish her staff of 12 a great weekend,. Then she and Brian would pack up the Ford Explorer and head up Route 85 toward FedEx Field. The two hardcore fans would stay at a hotel near the stadium, tailgate the next day, cheer on their team at the game, then drive home to Tarboro.

“We did that for 18 weekends for six or seven seasons,” said Patty. “We never played the radio on those trips. We talked all the way. It was our mother and son time.”

Above: When its game day Brian Cox and his and mom, Patty Zelaney, are always in Redskins “cheer gear.”

In addition to supporting her team, Patty became an avid collector. For decades she accumulated a treasure trove of Redskins memorabilia. As a result, when mother and son relocated to the islands in 2014, Patty’s nephew became the beneficiary of a U-Haul trailer’s worth of everything from Redskins lamps, neon lights, and rocking chairs to a football-shaped crockpot powered by an auto cigarette lighter — ideal for tailgating.

Here in the islands, Brian owns and operates Root 42 Bar and Grill and recently partnered with Brandon Lutzy to open Whiskey Business Bar and Grill in Tillett Gardens.

Despite being far from the mainland, Patty and Brian still watch the Redskins together on TV — always dressed appropriately in Redskins attire.