»  » Welcome to the Legendary Tillet Gardens

Welcome to the Legendary Tillet Gardens 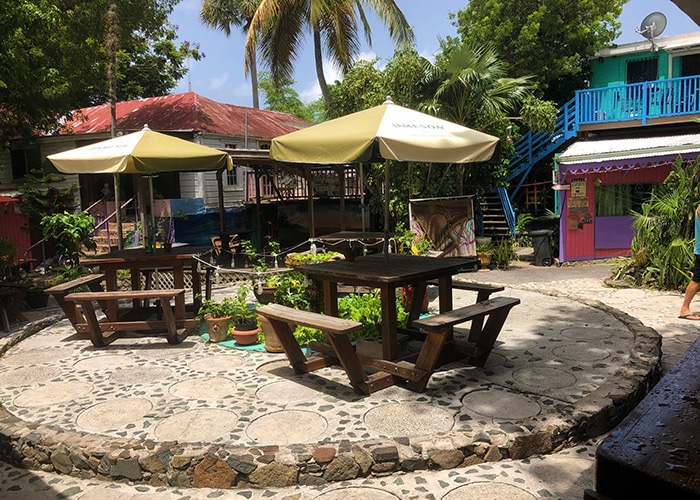 Above: The talents of local artists are reflected everywhere you turn at Tillett Gardens.

Top of page: At Tillett Gardens, patrons of Whiskey Business Bar & Grill are invited to relax under umbrella-topped tables.

The history of Tillett Gardens dates back to 1959 when newlyweds Rhoda and Jim Tillett moved to St. Thomas, purchased an abandoned Danish dairy farm in Anna’s Retreat, and designed it to be “… an old world retreat from the stresses of life, centered around arts and crafts.”

For nearly three decades, the complex served as home to Jim Tillett’s silkscreen studio. In addition to original artwork and prints for sale, the boutique sold fashions and accessories created from the colorful silkscreen designs.

Above: Welcome to Art Explorium in Tillett Gardens, a community arts center offering art classes and workshops for children and adults.

Above: Pies at ‘Za Rock Pizza Kitchen in Tillett Gardens are available in personal, New York or Detroit styles.

During that era, several popular eateries served patrons at Tillett Gardens with El Papagayo Mexican restaurant taking the lead from the late 1960s to the ’80s.

In 1980, in an effort to place a spotlight on local artists, Rhoda organized the first Arts Alive fair. Warmly received by residents and visitors, festivities were held three times a year for almost two decades. The boutique closed in 1988 and in its place, Tillett Gallery was established to showcase Jim Tillett’s silkscreen art as well as works by other talented islanders.

Rhoda also introduced Classics in the Garden concert series in 1987. She was responsible for booking world-renowned talent that performed up to and including the year of her passing in 2003. Her husband preceded her in death in 1996.

The couple left a legacy dedicated to uplifting the arts — and students and the arts.

Despite the fact that Tillett Gardens sustained substantial damage from hurricanes Irma and Maria in 2017, today, the couple’s son, Eric Tillett, continues to operate the storied complex.